So even though I had a jolly ‘ol time hanging by myself, catching up on Grey’s and eating mushroom-inspired dinners while my hubby was in NY this week, I kind of missed the guy! I decided to make him one of our old favorites upon his return, which requires a little more prep and ingredients but is SUPER delicious and always worth the extra effort. We are big red meat eaters but don’t necessarily like the cost of a good cut of beef. Back when I was gainfully employed I usually would have made this sandwich with left over beef tenderloin, but in the interest of making it budget friendly I decided to substitute skirt steak which is awesome on the grill and still super tasty. The use of Brie speaks for itself, as I could eat an entire wheel lol but feel free to use a more generic cheese to cut costs. Here’s my recipes for both the sandwich and the sweet onion jam (which is great for other uses as well!).

*this makes 2 large sandwiches, you can easily adjust the recipe for more :).

1. Start by heating your grill or grill pan. Pour a liberal amount of olive oil over the steak and sprinkle with about 1/2 tsp salt.

2. Place steak on grill and cook to desired temp. I prefer mine medium, which was about 5-8 mins per side. 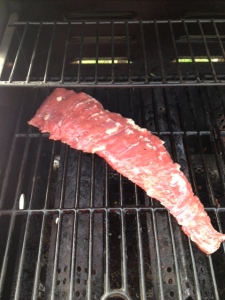 3. While steak is grilling slice your cheese, pears and bread (I heated my bread for a bit on the grill when the steak was cooking on it’s second side, but this is not necessary).

4. When steak is done allow it to rest for 5-10 mins before slicing thinly against the grain, this is important with skirt steak, if you slice with the grain it will be very hard to chew. I generally cut my piece in half, then slice each half individually (see picture). 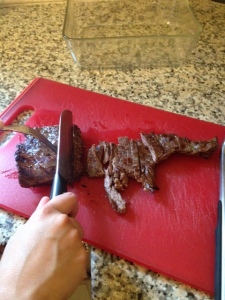 5. Now you are ready to assemble your sandwiches. First, spread each piece of bread with about 1 tbsp. of the onion jam, then layer steak, brie, pears and finally, arugula.

6. Place sandwiches back on the grill and allow to cook for about 2 mins on each side, just enough for the outside to crisp and cheese to melt. If you prefer to heat them in oven or in a pan this is fine too. These would also be amazing paninis if you have have a panini press

7. Slice your sandwiches in half and enjoy! 🙂

A collection of Kitty's Creations :)